Skip to content
Posted by Muniu February 13, 2019 under how to

First it was Facebook owned messaging service, Whatsapp that allowed user to ‘unsend’ messages they had sent. Then Techcrunch reported some time back that Mark Zuckerberg himself had retracted Facebook messages he had sent.

We’re not sure whether he was testing this new feature but now, Facebook messenger users can delete sent messages in both their apps and the apps of their recipients; creating an impression of ‘unsending’ the message.

When you realize you shouldn’t have sent that message you just sent, you are allowed to ‘Delete for everyone’ which deletes it from both your accounts. Touch and hold the message, until you see the ‘Delete’ option. 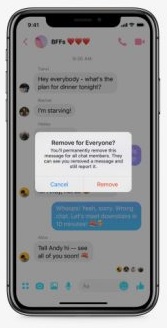 Recipients of deleted Facebook messages will still see a notification and they’ll see a stamp of the Deleted message. So he/she will know that you sent a message and deleted it.

This feature is still rolling out to users across the world. If you don’t have it yet with the latest version of Facebook messenger, then it’s on its way soon.

Also Read:  How To Unsend Emails in Gmail