Wireless charging is definitely the future.  But how does it work?  How does electric current move from the wall socket to your battery without wire connection? Here’s how it works.

Remember magnetic induction? I’ll take you back to child hood when we used to make a coil out of copper wire and put a nail inside the coil. Then connect the two ends of the copper wire to a battery’s terminals and this would create a magnetic field around the coil. 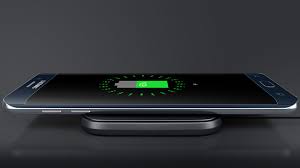 Wireless chargers work the same way but in reverse. There is some kind of coil in all wireless enabled smartphones and devices. The coil is connected to the phone’s battery. When the phone is placed on the Wireless charger, the wireless charger creates a magnetic field inside the phone. The coil inside then converts this magnetic energy into electrical energy that charges your battery.

There are various wireless charging standards and you need to know which one your phone supports so that you can get the right wireless charger for your smartphone. Some standards like Qi use magnetic resonance. It’s basically similar to magnetic induction but it allows more than one device on the charger. It also allows devices to charge without being in direct contact with the wireless charger.

For all standards,  the general concept is the same. Electromagnetic induction. Your smartphone must have the hardware to have wireless charging.