CCTV and security cameras are designed and placed in a way that the people being recorded know that they are being recorded. Some people take surveillance to another level by placing hidden cameras in houses,  bathrooms,  hotel rooms, offices and other places.

The problem with hidden cameras is that, you don’t know you are being recorded. Most of the time when you suspect you are being secretly recorded, you probably are. You don’t need James Bond gadgets to detect the presence of a hidden camera in a room where you are.

How To Detect a Hidden Camera:

Hidden Camera Detector is a free app on the Google play store for Android smartphones. The app is pretty straight forward.  Once you install and launch it, the interface is clean. 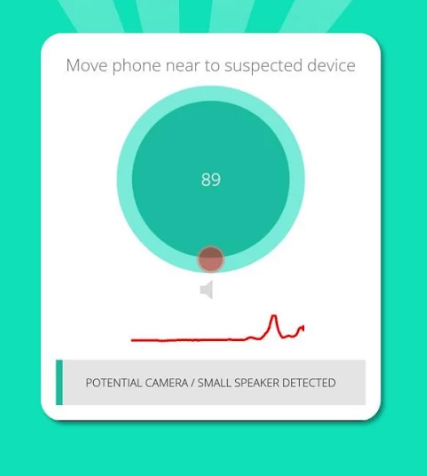 The number on the screen is what indicates the type of radiation. If the number is 100 and above, then the radiation is coming from a hidden camera in the room you’re in. You better start looking for it.

Glint Finder is also another app on the Play store with which you can detect hidden cameras. No matter how hidden a camera is, the lens cannot be completely hidden. Glint finder detects hidden camera lenses using the same technology as the tools used by professionals to help search for and find the lens glint given off by hidden spy camera optics.