It’s been ten years since Twitter was launched.  That’s a lot of years and a lot of tweets. The BBC published some of the first tweets sent out by Twitter’s big names.  Some of them are hilarious!

How did BBC know all these people’s first tweets? Can you remember your first tweet? Right after you signed up and you wanted to know what the fuss was all about. You probably don’t.

To make things more interesting, this tool also allows you to find anyone’s first tweet as long as their account is public or you’re following them.  You just need to enter his/her username in the text box and search.

Who Tweeted It First?

You’ve probably seen a phrase, a link, a word, a trending topic or a hashtag on Twitter and wondered who started it.  For any of these things,  there is a person who tweeted it first and the good news is,  you can find out who!

Amit Agarwal, a popular Indian blogger has put together an incredible tool that allows you to find the first tweet containing the word,phrase, link, hashtag you’re looking for. Simply open the tool here:  https://ctrlq.org/first/ 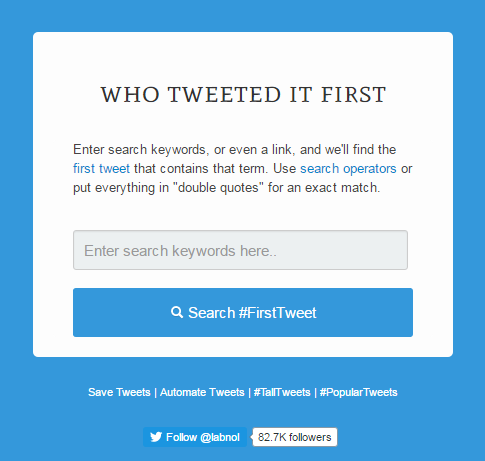 Enter the word, phrase, link, hashtag or whatever in the text box provided and search for the first tweet containing it.  That’s how you find out who tweeted anything first.